Backrooms Wiki
Register
Don't have an account?
Sign In
Advertisement
in: Confirmed levels, Confirmed photos, Cluster I,
and 6 more
English

Level 1 is the 2nd level of the Backrooms. 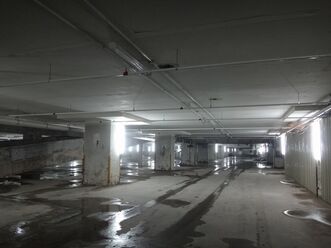 Level 1 is a massive warehouse with concrete floors and walls, exposed rebar, dim fluorescent lights placed on the walls and a low-hanging fog with no discernible source. The fog often coalesces into condensation, forming puddles on the floor in inconsistent areas. Unlike Level 0, this level possesses a consistent supply of water and electricity, which allows indefinite habitation by wanderers providing that appropriate precautions are taken. It is also far more expansive, possessing staircases, elevators, isolated rooms, and hallways.

The fluorescent lights at any time can flicker and turn off for minutes or even hours. When this occurs, hostile entities may appear. These entities rarely attack in groups and tend to avoid light. If the lights turn off, It is strongly advised to try and navigate your steps, Try and avoid any strange noises and then find a room, Make sure to bring a light source with you.

Crates of supplies appear and disappear randomly within the Level, often containing a mixture of vital items (food, Almond Water, batteries, tarps, weaponry, clothing, medical supplies) and nonsensical objects (assorted car parts, boxes of crayons, used syringes, partially burned paper, live mice, mice in a catatonic state that have been injected with unknown substances, shoelaces, loose change, bundles of human hair). The crates should be approached with caution due to their contents, but are a valuable resource.

In addition, crude paintings and drawings with no apparent origin or meaning appear on the walls and floors. They are known to change in appearance and disappear when not in direct line of sight or when unlit. The light fixtures within Level 1 are prone to flicker and fail at inconsistent intervals; when this occurs, supplies are liable to vanish inexplicably and hostile entities may appear unexpectedly. These entities rarely attack in groups, and tend to avoid light and large gatherings of people. It is advised to carry a reliable light source and sleep holding whatever items you do not wish to lose.

Level 1 also serves as the entrance to The Hub.

Beings typically lurk in Level 1, especially when the lights are off. Known beings on Level 1 include Dullers, adult Facelings, Hounds, Skin-Stealers, Scratchers and Figures.

There are currently 18 known colonies and outposts in Level 1. It should be noted that attempting to meet up with these colonies/outposts will prove extremely difficult, as the Backrooms stretch out for millions of miles. Some of them may not exist now, some might have not existed at all.

The Raiders (Recently got knocked out via a joint alliance)

Base Flickers of the Backroom Colonists

Base Lurkar of the Backroom Colonists

Base Aat of the Backroom Colonists

Oasis Lyra of The OFSEB

One can exit Level 1 by simply continuing to explore the Backrooms. Level 1 usually leads to Level 2 or back to Level 0.