Backrooms Wiki
Register
Don't have an account?
Sign In
Advertisement
in: Levels, Unrestricted Levels, Cluster I,
and 2 more
English

You feel a calming sensation.

Level 37 is the 38th level of the Backrooms.

Level 37, commonly referred to as the Poolrooms, is an expansive complex of interconnected rooms and corridors slightly submerged in undulating, lukewarm water. Each area of the level varies greatly in size and structure, ranging from uniform pools and hallways to more open, abnormally-shaped areas. The walls, ceilings, and floors of the level all appear to be constructed from the same white ceramic tile, with the only deviation from this color being the blue-green hue of the water.

The architecture of Level 37 is varied, but strict in nature; it is eerily pristine, and does not deviate from an orderly evenness. Although the intended purpose of each area is difficult to ascertain, they are much too large to properly serve the function of a pool. The abnormality of Level 37's geometry nullifies any purported purpose it might serve; pillars protrude out of the water in certain areas, much too large in quantity to justify their amount; larger submerged areas lack a ledge to climb out of the water where one would typically be expected; light is cast from irregular angles, leaving some areas completely cast in darkness; and staircases descend directly into deep pits of water, possibly giving the impression that the water was not originally present. Entrances to these deep areas are typically found in the form of descending staircases or direct underwater holes. It is strictly advised to avoid exploring these areas due to their inherent danger, being that they are completely devoid of light and thus have unmapped terrain. Without the proper equipment, one could easily get lost or even drown in the level’s depths.

Another image of Level 37.

The temperature of the water is strangely consistent; even in the dark areas of the level where no light reaches, the water is still noticeably lukewarm. Upon investigation, traces of Epsom salt (magnesium sulfate) have been found in the water of Level 37. This compound, when engulfing one’s body for an extended period of time, has a naturally relaxing effect, relieving muscles and other bodily pains in most areas. Along with this, traces of multiple unknown compounds were also found present in the water. The properties of these substances remain enigmatic, but it is suspected that they add to the relieving effects of the water, which has been declared anomalous itself.

By unknown means, a minimal and constant rippling is present in the water covering Level 37, despite it being undisturbed. It is not known whether this rippling originates from a certain point in the level, or if it is a property inherent in the water itself, though some wanderers theorize the level may be so large that it has developed its own tidal forces.

Sound is severely altered in Level 37. Wanderers are affected in various ways, the most commonly reported effects being all noise dropping off quickly, not echoing as it normally would, and feeling "muted" or "dampened". It is suspected that this primarily stems from the sound of the water, which behaves in a subtly unorthodox manner. In certain explorations, the sound of the water is reported to be quiet, almost calming, whilst in rarer cases, it quickly becomes obtrusive and drowns out other sounds. The cause of the water's subjective effects is still undergoing research, though it is theorized that the differing effects may result from one's life or history.

Level 37 is entirely devoid of life. No encounters with entities or other wanderers have been recorded in the level; it is not known if this results from a previously unknown isolating property of Level 37, or if the level is so unimaginably large that one could not possibly come across another within it. Aside from the lack of animated life, one "entity" has been discovered in the level, that being the Hydrolitis Plague.

A deep pit of water.

The Hydrolitis Plague, typically referred to as simply Hydrolitis, is a bacterium located in the water of the darker areas of Level 37. The disease lurks around untreated and stagnant bodies of water, being most common in abandoned pools. It can appear due to multiple environmental factors, and in the case of pools, spread rapidly due to the lack of chlorine. Hydrolitis is mainly transmitted by airborne particles containing the bacterium, or by consumption of water containing the disease. Infected people can exhale the particles, possibly infecting another when in close proximity. The disease has multiple symptoms, including weakness, high fever, severe pain, and possibly delirium if infected for a longer period of time. Due to the nature of Level 37, the interpersonal spread of Hydrolitis is not a concern, but the effects of the symptoms may be worsened in the level due to the lack of medicinal availability.

Due to the isolating nature of Level 37, the existence of colonies and outposts is considered infeasible.

Recovered Note:
My Musings
After numerous explorations, boundless journeys through unquantifiable locations, it seems I have finally reached a place of solitude. Endless halls, long darkly-lit corridors, empty structures of no end; those are what I have become accustomed to. This, however, is my first breathing point in a storm of chaos and confusion — a peaceful point where I can finally rest. Never before have I witnessed architecture such as this; brightly-lit rooms with pools of blue water, surrounding one’s body like a warm embrace. White ceramic tiles make up the walls and floor, reflecting the light and leaving no corner untouched by its radiance.

These places are not bounded in reality — they are a microcosm of one’s mental state, a reflection of their emotions; they are a twisted parody of reality, extended interpretations of locations one does not typically consider whilst passing through. Exploring them can be described as exploring a place inside a dream. They are not infinite, nor are they finite; it is of my belief that these places reflect the headspace of those experiencing them. It is not the doing of any force or overseeing entity whatsoever; instead, it is one’s emotions that keep the rooms extending. There is no architect to these places beside our minds; that is why experiencing these places alone accentuates feelings of isolation. They are human thought pushed away from its makers, alien despite their familiarity. Theoretically, if one were to be completely calm and at peace with their current location, and did not have the inherent desire to escape, they would have the best chance of finding an exit.

I’ve come to call them Scapes. Dreamlike realms one passes through, experiencing and subsequently continuing to the next, like a journey of sorts. One may exit at any time with the right headspace; attaining it, however, is no easy feat whilst running through looping hallways and decrepit offices with nonsensical geometry. While being illogical and foreign, these places are tailored to you. The places you commonly pass through without any thought become all you know. Each Scape is far too familiar, but far too strange to be comforting; it can be compared to a nightmare.

I digress. In short, this Scape in particular truly amazes me. The effect it has on those who experience it is intriguing; while one feels peace and calmness permeating throughout, another cannot help but notice a feeling of dread wash over them as they notice its strange, lightless corners. "What lurks behind them?" they likely wonder. ”Is it of blight, of malice?” A grim scepter seems to wash over the soul, despite the fact that they are safe. An explorer may feel moribund, whilst another may feel tranquil. This strange effect has never ceased to intrigue me. This Scape is without blemish or defect; the “Poolrooms” are simply stunning — an intricate design, a possibly infinite puzzle whose pieces form something peculiar — indescribably strange, yet indescribably perfect; it can only be the handiwork of a God.

The wanderer turned to their left, to their right, and looked up. The bluish-green waters and perfect white tiled walls were strange; looking behind them, they saw much more light than they had in the other direction. They couldn't quite make out where it was coming from, though. Perhaps a celestial body – they had no way of knowing, but it did not concern them. They removed the bag from their back, holding it up to their stomach to not get it wet. Several times, they lost grip; however, they always caught it before it hit the water. They took out a few essentials: a flashlight, in case of night, a few cans of food, and nothing more. They slung the bag on their back again and continued wading. Although they felt confident in the beginning, as they treaded onwards, they caught their eyes wandering from left to right, at the darker, eerier pockets of Level 37. They began feeling butterflies in their stomach, their eyes scanning more and more rapidly. They did not feel alone, though they were more alone than they had ever been. They turned around, having sworn to have heard something. There, of course, was nothing. They were alone. Finally, there was a ledge to get out of the water. Clenching a small can of food in their teeth, the wanderer gripped the flashlight as they crawled out of the water and slumped in a corner. The wanderer's shivering body felt heavy as water clung to the lower-half of their clothes. Drenched, the wanderer hugged their legs and cried, the sounds of the water stifling any noise that might have escaped. 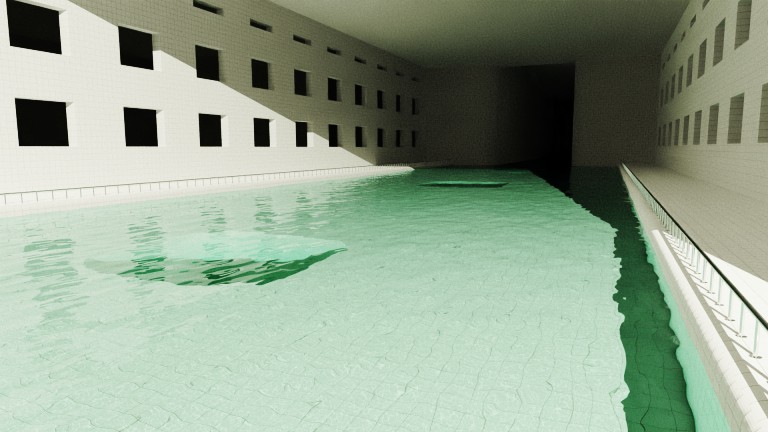